Fasteners come in different shapes, sizes and drives. While Flat-head and Phillips are the more popular types, Automobile, Computers and several consumer electronics use a special type of Fastener known as Torx Screws. Technically, they Star screws and the “Torx” is just a trademark of such screws and drives by Camcar Textron. In this guide, we will see all the basics of Torx Bits and different types of them. We will also draw a Torx Bit Sizes Chart to list out dimensions of popular Torx bits.

Camcar Textron trademarked a special screw drive with the name Torx. The main characteristic of this drive is its 6-point pattern that looks like a star-shaped pattern. As a result, many started calling it a Star Screw.

The generic name for such screw and drives is Star while the popular name Torx is a trademark of Camcar Textron. Since the expiry, several manufacturers started producing Torx bits. 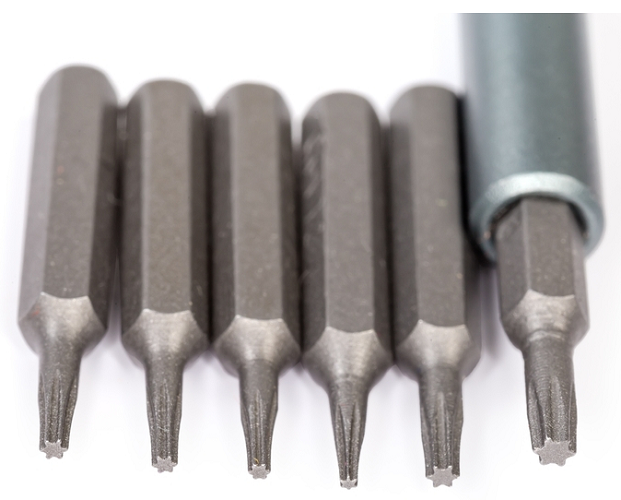 One common problem with flat-head and Phillips is cam-out. It is a process where the screwdriver driver slips out of the screwhead if the torque exceeds a limit. The design of the Torx head prevents this cam-out and thereby causes less damage to head.

Even if you apply a higher torque than the limit on a Torx screw, it will not damage the screw head or the bit itself. Both the Torx screws and the screwdrivers can last longer than other drive types.

The regular Torx drive is known as Internal Torx where we insert the bit into the screw head. There is also a Torx with a reverse design. We call it External Torx. They are similar to Nuts and Sockets where the bit or socket goes on top of the screw or nut.

There is a variation of the Torx known as Security Torx. Other names are Tamper Resistant Torx, Tamper Proof Torx, Pin-in Torx and 6 Lobe Pin Torx. The main difference between a regular Torx and a Secure Torx screw is the additional security pin in the center of the screw head.

As a result, you cannot use a standard 6-point Torx screwdriver on a Secure Torx screw.

Both Standard Torx and Secure Torx have several types. We will see few details about them before looking at the Torx Bit Sizes Chart.

After the original patent expired in 1990, Camcar Textron modified and improved the design of original Torx and released a new version Torx Plus. Depending on internal or external drive, the Torx Plus is known as Internal Plus and External Plus respectively.

The design of the Torx Plus resembled that of a gear with more square lobes. This design change resulted in application of even greater torque on the head with minimum wear.

Tamper Proof Torx (Secure Torx) version of the “Plus” had only 5 Lobed instead of 6. These are not that popular.

Some other versions of Torx are Torx Paralobe, Torx Ttap, Torx Plus Maxx Stems and Audi Torx.

For example, if you have a screw with TX size, then you have to use a Torx Screwdriver or drive bit of TX size only.

The following is a Torx Bit Sizes Chart for Internal Torx. Two dimensions are important with respect to Torx screws. They are Point to Point and Diameter of the screw threads.

Torx drive has several benefits over Phillips drives. Torx is a trademark name for Star drive by Camcar Textron. You can see Torx Screws in computers, home appliances, automobiles. They are noy compatible with Hex drives and Allen Keys. You have to use the correct size bit to tighten or loosen a Torx Screw.

In this guide, we saw the basics of Torx Screws, Drives, and Different Types of Torx Drives. After that, we also saw the Torx Bit Sizes Chart for both Standard Torx and External Torx (Socket style).