Capacitors are common passive elements in all electronic devices, including vehicles. The usage of capacitors in vehicles is expected to increase in the coming years as electric vehicles (EVs) gain popularity. It is important to select capacitors wisely in order to combat common issues that occur in vehicular circuitry

Vehicular systems today have become vastly advanced. Smart cars, self-driving cars, electric vehicles, etc are rapidly gaining popularity not only among the wealthy but also among the middle-class society. Thanks to the huge boom of innovation in this field, there is a need for better and more durable electronic components, both passive and active.

Capacitors are widely used in the automotive industry. In fact, they are crucial to the functioning of a vehicle. They provide stability and are used in the management of current in the vehicle’s circuitry. They are also used to ensure that the design is free from interference. Capacitors play a major role in braking systems, window wipers, seat aligners, airbag controllers, and many other important applications inside a vehicle.

Driven by concerns about petrol prices, government environmental initiatives, and large-scale public and private investment in the supporting charging infrastructure, the electric vehicle (EV) sector is undergoing a period of substantial growth. Over the course of the next decade, the automotive market is set to transition from being dominated by internal combustion engine (ICE) vehicles to one where EVs make up the majority of new vehicle sales.

ICE vehicles have relied on 12V and 24V powertrain architectures, with hybrids often being based on 48V systems. EVs, however, have powertrains that are placed at far higher voltages. Further, in order to accelerate charge times and increase conversion efficiencies, the voltages are being pushed even higher. The new EV models that are just starting to appear on the market have 800V powertrain ratings!

For the first time, worldwide EV annual sales surpassed 6 million units in 2021. Predictions made by the International Energy Agency (IEA) suggest that this is just the beginning. It forecasts that sales will have reached 15 million by 2025 and 25 million by 2030. The powertrains of EVs need to support higher voltage levels compared to their ICE counterparts, and this will have major implications when it comes to specifying constituent passive components.

Even for 48V hybrid systems, the motors will be located on the powertrain itself. This does, however, mean that the accompanying electronics will be exposed to more intense vibrations and thermal cycling. Factors like vibrations, shock, and stress have clear effects on the passive components present in the system. Therefore, automotive engineers must look at the effects this will have on component reliability.

A key performance parameter for any DC-Link capacitor will be its equivalent series resistance (ESR) value. The lower the ESR of a capacitor, the greater its ability to smooth out high-frequency voltage disturbances passing through the powertrain. If the ESR values that these capacitors present within the electrical circuitry increase due to some form of damage, the whole powertrain operation could potentially be jeopardised. 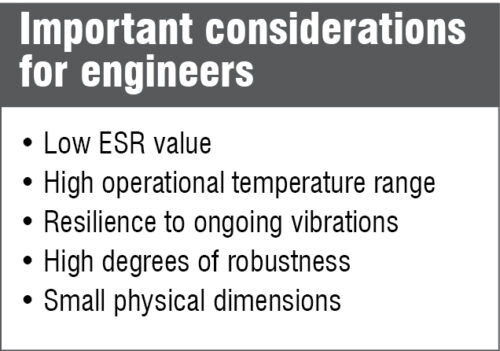 While selecting capacitors that conform to these factors, vehicle manufacturers must keep the overall bill-of-materials expense as low as possible, so the chosen capacitors have to be cost-effective. There is, therefore, a constant tradeoff between efficiency and cost, and engineers need to maintain both sides of the equation for the vehicle to be optimal.

Effect of vehicle vibrations and stress

The adoption of high voltage levels in EVs and the location of motors away from the protection of the engine compartment in a few hybrid systems will have implications for the DC-Link capacitors incorporated into EV and hybrid powertrains. Situated between the battery and the traction inverter, these passive components are used to smooth out the voltage and prevent unwanted transient spikes from occurring. If they are to be effective, a high degree of robustness is needed. This will allow them to cope with the challenging application environment that automotive deployment represents.

Standard multilayer ceramic capacitors (MLCCs) are not well suited to automotive usage, as they are not able to cope with the acute mechanical stresses involved. If the PCB on which they are mounted flexes, due to either vibration or thermal cycling, the solder joints will be placed under considerable strain. This can lead to cracks appearing within the ceramic substrate. These cracks can result in moisture ingress arising which will, in turn, impact the capacitor performance. If these components are located close to the edge of the PCB, the stresses that they are subjected to are likely to be even greater.

The vibrations witnessed in an automobile can come from a variety of sources and be at a wide range of different frequencies. Though these issues are intrinsic in automobile design, they can be mitigated in a number of ways as follows:

Specify polymer capacitors instead of MLCCs

Unlike normal capacitors whose electrolyte is actually a liquid—a conductive solution—polymer capacitors have a solid electrolyte that’s made up of conductive polymers. They are therefore more compact and there is no chance of leakage or the capacitor drying out. These components will have lower ESR values than MLCCs, with better performance across a wide range of operating conditions. However, there are increased costs involved.

A great example for this category would be Kemet’s solid polymer aluminium capacitor. It is the solid polymer that makes these capacitors vibration-resistant. In their A768 series of solid polymer capacitors, a few design changes were made to increase their vibration tolerance even further. They were provided with a taller base for better physical support. What’s interesting about these capacitors is that they have extra terminals that do not provide electrical conductivity but are actually used to give the capacitor a stable connection to the PCB.

Kyocera AVX has two special series of automotive polymer capacitors: the TCQ series and the TCO series. TCQ is used for standard temperature conditions while TCO is used for applications that demand higher temperatures. Both of these meet all the ‘AEC-Q200 Stress Test Qualification for Passive Components’ requirements and are reliable for a wide range of temperatures. They are robust and provide stable performance with a low ESR.

These comprise an anode with a liquid and conductive polymer construction, alongside a cathode made from aluminium. The large surface area of the liquid enables elevated capacitance values to be achieved in a compact form factor. Like the previous option, this comes with added costs.

The EEH-ZS hybrid series of capacitors from Panasonic particularly target automotive applications and have vibration-resistant properties. These have auxiliary side terminals that enhance their vibration resistance. This is why these capacitors can withstand shocks with vibration acceleration up to 30G. Further, the side terminals make soldering easier. While using these capacitors, designers may choose not to deploy external anti-vibration techniques. These are also RoHS/REACH compliant and qualify the requirements set by AEC-Q200.

In MLCCs, it is possible to make certain enhancements to the methods via which the capacitor body and its terminations are interconnected with one another so that the vibrational forces experienced are dampened. In this way, additional costs of using polymer or hybrid capacitors can be avoided. This enables greater mechanical robustness to be attained, while still benefiting from the cost advantages of MLCCs.

To address the need for capacitors that are able to resist vibrational forces, Kemet developed its FT-CAP series. These MLCCs have an innovative termination arrangement that helps to lower the strain imparted from the PCB when it is flexed. A conductive silver epoxy layer is included in the termination structure (situated between the base metal and nickel barrier layers). This enables terminal strength to be upheld but provides the cushioning necessary to prevent any cracks from appearing. The capacitor’s continued performance is thus assured.

Kyocera AVX is also tackling the vibration issues previously outlined through its Flexiterm low ESR MLCC products. These also have flexible terminations fitted to them for added elasticity. Here nickel-plated copper terminations are supplemented by a proprietary layer that absorbs incident mechanical stresses. The manufacturer has successfully managed to do this without there being any major increase in the costs involved. They support an -55°C to +125°C operational temperature range and 5mm flexes can be comfortably handled by them (compared to the 2mm that MLCCs are normally rated for). 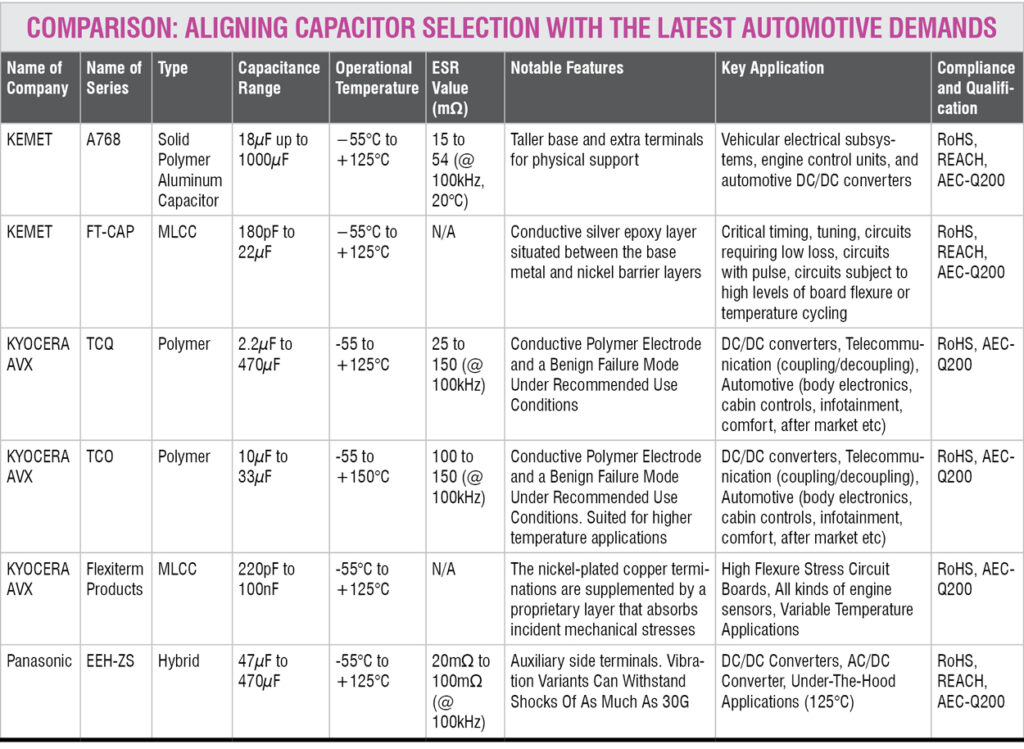 A comparison of the capacitors mentioned above is given in the Table.

There are many capacitor series developed by other manufacturers to combat specific issues, not only vibration. They leverage engineering advances that provide enhanced levels of ruggedness. For example, the PCZ series introduced by Nichicon Corp. has a great degree of heat resistance.

The automotive industry places exacting demands on the electronic hardware employed in vehicle designs, and the next generation of vehicle models (particularly those that are EV or hybrid) will only exacerbate this. High voltage levels will call for capacitors that have superior performance characteristics. These components will need to withstand heavy vibrations, for instance, as they are now being placed into more difficult surroundings. This means that automotive engineers need to select their components wisely to be assured of long-term reliability even under the harshest of working conditions.

This feature is inspired by an article authored by the technical content team at TME. The co-author, Aaryaa Padhyegurjar, is an Industry 4.0 enthusiast with a keen interest in innovation and research.