Allegro MicroSystems has released two new position sensors for ADAS applications. The A33110 and A33115 feature a TMR and vertical Hall elements to achieve high accuracy and with built-in redundancy for safety-critical systems. The angle sensors are said to be the first commercial sensors to offer both the vertical Hall Technology (VHT) and the advanced tunnelling magnetoresistance (TMR) technology in a single package. 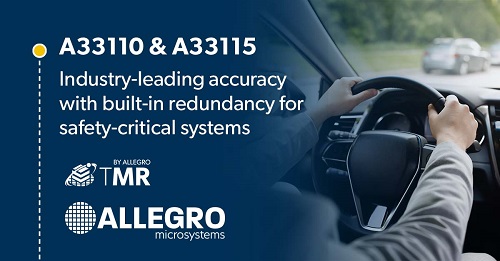 According to the company, the A33110 and A33115 magnetic position sensors are specifically designed for advanced driver assistance systems (ADAS) applications that require high levels of accuracy and heterogeneous signal redundancy. The combination of VHT + TMR offers a superior heterogeneous redundant sensor solution and brings us a step closer to the more reliable and safer vehicles of the future.

“As full autonomy comes closer to being a reality, automakers and Tier 1 suppliers are looking for position sensors that provide the greatest accuracy and safety while reducing system footprint and cost,” said Scott Milne, Business Line Director for Position Sensors at Allegro. “By integrating both vertical Hall and TMR elements in a single package, Allegro’s new line of sensors enables customers to meet those needs with a sensor that provides high resolution and heterogeneous redundancy along with integrated diagnostics. There’s nothing else on the market like them, and we think they are a game-changer for the industry.”

Allegro’s A33110 and A33115 sensors provide magnetic angle sensing via both the primary (TMR) and secondary (vertical Hall) transducers, furthermore, both sensors employ 2 regulators and 2 temperatures along with two independent channels to process, thus, making the system more reliable and safe. The A33115 also includes a turn counter that tracks motion in 90-degree increments and a low-power mode with a user-programmable duty cycle that reduces power consumption when the IC is in a key-off position.

Types of Garden Hoses – Everything You Need to Know