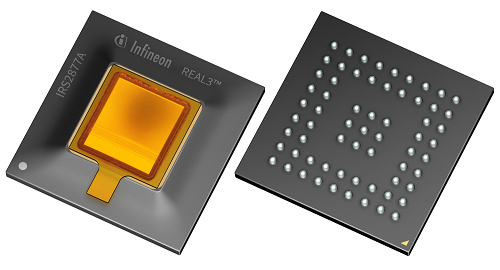 Infineon Technologies have developed this second generation of REAL3 automotive image sensor in collaboration with the pmdtechnologies ag, which are considered a specialist of 3D time-of-flight systems. The high resolution of the REAL3 sensor makes it suitable for camera applications with a wide field of view, such as complete front-row occupant monitoring systems.

“Leveraging our leadership in 3D sensors for consumer applications, we are now offering high resolution with a tiny image circle to the automotive world. This enables cars with functions from the consumer world while maintaining automotive standards and even improving passive safety,” said Christian Herzum, Vice President of 3D Sensing at Infineon. “For instance, reliable and secure facial authentication allows seamless connectivity for any type of service that requires authentication such as payment, battery charging or accessing private data.”

According to the company, the sensor can be used as a driver monitoring system as it meets all the requirements for the same, it can be used to detect the movement and facial expression of the driver to predict distraction and fatigue. These features enable this sensor to work as a driver detection system using only one ToF camera.

“From the start, we were focussed on improving the robustness of the underlying pmd-based ToF Technology against external influences such as sunlight or other disturbing light sources. For this reason, the new imager shows excellent and cutting edge performance even under harsh conditions”, said Bernd Buxbaum, CEO pmdtechnologies ag.

The sensor comes in a compact package measuring just 9 x 9 mm² and offers a resolution of 640 x 480 pixels with a tiny image circle of 4 mm. The image sensor is qualified to AEC-Q100 Grade 2 and is the first of its kind being developed according to the ISO26262 (ASIL-B) standard.