Home » Reviews » RGBIC vs RGB | Differences, When to Use RGBIC and RGB?
Reviews

RGBIC vs RGB | Differences, When to Use RGBIC and RGB?


Even though we do not use LED Strip Lights as main lighting in our homes and offices, they are useful for several other purposes such as decoration, highlighting, ambient etc. RGB LED Strips with a tiny remote control are very popular and cheap. But there is a new type of LED Strip known as RGBIC in the market. What is this RGBIC? How is it different from regular RGB LED Strip Lighting? Which one should you buy: RGB or RGBIC? We will find out answers to all these questions in this RGBIC vs RGB Comparison guide.

LED Strip Lights are nothing but a string of LED lights arranged in series on a flexible (but sometimes rigid) surface. They are extremely fashionable lighting decoration, staircase, theatre (cinema or play), holidays, hallways, cars and many more.

They are available in single color options, usually different shades of white (cool, neutral and warm) and also as RGB that can display Red, Green, Blue or any combination of these primary colors.

An RGB LED Strip, as the name suggests, consists of RGB LEDs in series. Each LED in the series is made up of Red, Green and Blue LEDs. With a suitable controller and some simple PWM signaling, we can produce Red, Green, Blue, Cyan, Yellow, Magenta, White and a whole lot of other colors (by combining the three primary red, blue and green colors).

RGB LED Strips Lights are simple, inexpensive and easy to use. Simple fix the LED Strip on the surface (under kitchen cabinet, back of the TV, running along the staircase, to name a few common applications), connect the strip to the supplied controller, turn on the power supply and et voila, the RGB LED Strips are up and running.

Most of them come with a simple IR Remote Control in the kit. The remote control has some of the basic colors and also some patterns (flashing, smooth, running etc.).

There is a new player in town and it is RGBIC LED Strip Light. Technically, it is also an RGB LED in the sense that it can display Red, Green and Blue Colors and also any combination of them. But how is RGBIC different from RGB?

It is in the name itself. An RGBIC has an integrated circuit, IC for short, on the LED Strip (actually there are multiple ICs on the strip). What makes these ICs special? Well, for starters, they allow for a more fine-grain control of the LEDs.

In the regular RGB LED Strip lights, when we set the color Red for example using the remote control, all the LEDs in the entire strip will become Red. Similarly with other colors. All LEDs will have the same color. 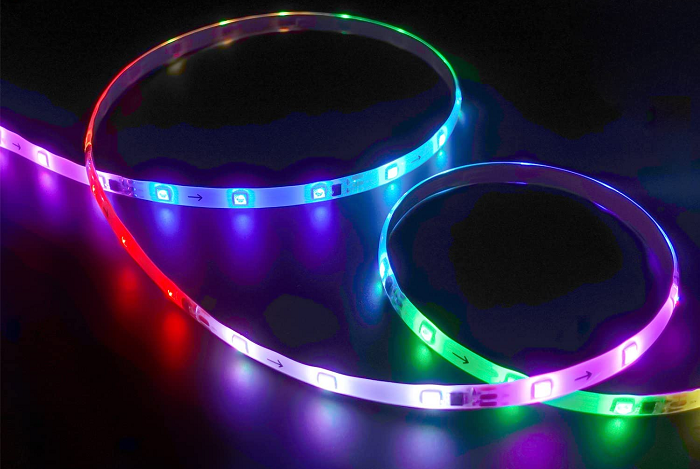 Things are somewhat different in RGBIC LED Strip Light. Due to the presence of intelligent ICs along the length of the strip, we have essentially divided the strip into several segments with each segment consisting of one IC and some LEDs.

The number of LEDs per segment can vary from strip to strip or on the type of LED. In case of standard WS2812B LEDs, each LED has one (in-built) controller. But some other type may have three LEDs per IC.

Benefit of such segmentation is that we can control the colors of those segments independently from other segments (whether it is one LED, three LEDs, it doesn’t matter).

It is clear that even though RGB and RGBIC can display multiple colors, how they do that is quite different. We will find out more differences between RGBIC vs RGB now.

When to Use: RGBIC vs RGB?

If you want to set the mood of room (a living room or a gaming room), then with RGBIC LED Strip Lights, you can have much more focused control on the lights than what you can have with RGB LED Strips.

Most manufacturers (a popular one is Govee) provide you with very good smart phone apps to control RGBIC LED Strip Lights. While the remote control allows you just set few colors, the smart phone app allows you to set the colors of individual segments, change effects and even create your own pattern and effects.

LED Strip Lights are neat little lighting devices that can help you decorate, light-up different areas of your home, car or garden. RGB LED Strips are very popular and easy to use. RGBIC LED Strip Light is something new that has a major advantage over regular RGB LED Strips lights: you can set multiple colors at the same time on the strips. This is possible because of its ICS (hence the name) and segmentation. We saw the differences between RGBIC vs RGB LED Strip Lights and also saw where and when to use RGBIC over RGB.

The pitfalls of mixing formal and simulation: Examples of the trouble