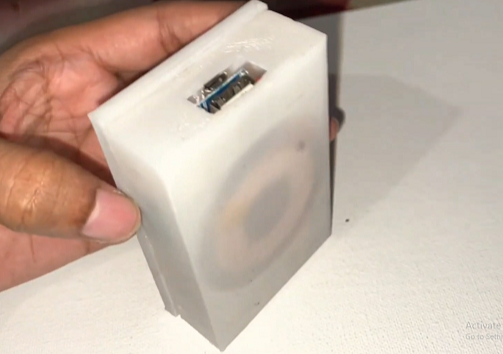 MagSafe, a magnetic technology embedded into the internal engineering of iPhone 12 models, was originally created as a safety feature for MacBook charging cords. It creates a new ecosystem of accessories for easy attachment and faster wireless charging.The cost of a wireless power bank with Magsafe ranges from INR5000 to INR7000. Apart from being expensive, it is very difficult to procure one from the market. This DIY design is of a wireless power bank with Magsafe, that can not only charge iPhones but also other compatible devices (including IoT devices). It offers the benefit of having a wireless powering system, MagSafe technology and a USB charging system which is compatible with many devices.

The size of the battery is important to design the case. Both the battery and the charging module have to be fit inside the case. An area for input power charging (USB) and output power is cut out on the case. A cavity is also made on one wall of the case for the coil and MagSafe magnet to be placed, as shown in figure 3.

To design the circuit, we can either use a 5V Step Up battery management IC or a module. Here we used the TP4056 1A battery charging Module. Its output is connected to a wireless transmitter a coil inputs =V goes to =V terminal and -Ve goes to -Ve terminal. , as shown in figure 5.

The battery terminals are now soldered either with wires or a battery pack connector strip. In case of multiple batteries being used, make sure to connect the batteries in parallel (that is +V with -V and +V with +V terminal of battery -Ve with negative of battery .(Refer Fig 6). Next, the battery step up charging module has to be connected as seen in the circuit diagram. The wireless charging coil should now be soldered with the input of the wireless power Tx module and its output with the charging module output pins. (Refer Fig 7,8,9,10)

The coil has to now be fixed in the cavity with a magnet for MagSafe. Above this the battery is fixed along with the BMS module in the USB cavity of the 3D printed case. The top cover is finally fixed. (Refer Fig 11,12,13,14)

To test the DIY, plug in any device to the USB and notice it charging (here an Airpod case is plugged in). Next, bring any wireless device (here a wireless LED is taken) and we notice the LED starts glowing(figure 19). This is because the power bank emits power in the form of electromagnetic waves. A phone can also be tested, by placing it on the device (figure 20).