Barometer Vs Manometer – Find the Difference?


You may find a barometer and a manometer in many homes, especially the old ones and the cottages or hotels beside the seashore or a beach area.

Traditionally, these two instruments keep track of the atmospheric pressure and the gas or liquid pressure in areas with unsettling weather.

But are these two the same? Well, they are not. While these two measure pressure, each one measures different types of pressure. Here is detailed information on the difference between Barometer and Manometer and why you need to use them. 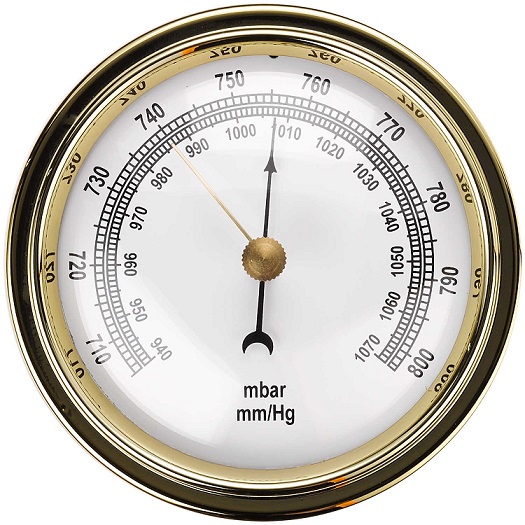 Barometers measure the air pressure or atmospheric pressure to offer any possible forecast about the weather. The barometer is kept at a fixed level, and it measures the subtle changes in the atmospheric pressure caused by weather elements like storms, cyclones, etc. Besides that, a barometer can also help determine the area’s altitude. Evangelista Torricelli is the inventor of the modern mercury barometer. He invented this simple yet effective tool in 1643.

Barometers can be either made with water or mercury. Here are the common types of barometers that are used today-

Lucien Vidi popularized the water barometer. On the other hand, Johann Wolfgang Von Goethe designed a water ball barometer by following Torricelli’s principle. This tool is known as “weather glass” or “Goethe Barometer”.

A water barometer is a sealed glass enclosure that is half-filled with water. The tool also has a narrow spout that connects to the main body. This narrow sprout-like structure has an open face, and the water in this section can interact with the atmosphere. The change in the water level of the main body and the sprout body offers a clear forecast.

These types of barometers are most commonly used to measure atmospheric pressure. The structure of this barometer is pretty simple. It is made of a vertical glass tube fixed in an upside-down motion so that the open face lies within a glass bowl. Both the bowl and the tube are filled with mercury. The change in mercury level inside the tube is used to determine atmospheric pressure.

The Sympiesometer is a special barometer that is lighter in weight and compact in size. It has one mercury thermometer and a barometer combined. This tool is mainly used to measure altitude.

The aneroid barometer is a modern instrument used to measure air pressure. Lucien Vidi invented it in 1844. This tool does not use any liquid, instead uses a metal box of an alloy composed of Copper and Beryllium. This box expands or shrinks with the change in atmospheric pressure.

Working Principle of a Barometer

The mercury barometer or Torricelli barometer has a closed tube standing upside down on a bowl filled with mercury. The atmospheric pressure pushes down the mercury inside the glass tube at sea level. Hence, the mercury level inside the tube rises by 76cm. This is considered at 1 atm or the initial base unit.

As the attitude becomes higher, the air pressure lowers, and the mercury level inside the glass tube rises less than 76cm. This difference is used to calculate the atmospheric pressure of a certain place.

Like the Torricelli barometer, the water barometer also uses quite the same principle. But, since water is lighter in density, a larger volume of water is often required.

In the case of a water barometer or weather ball barometer, the narrow spout is open, and air pressure pushes this, and the water level inside the sprout changes as per the air pressure.

Where Are Barometers Used?

A Manometer is an instrument used to measure fluid pressure or pressure of a gaseous matter. Otto von Guericke invented the manometer in 1661.

One of the levels of the U -limbs is equal, and this is used to measure the atmospheric pressure.

Now, the other column is connected to the pressure vessel. This will create a difference in the liquid level in the two tubes.

This type of manometer is made with a large well in one of the legs. The second leg has a tube. A small change in the tube causes a huge change in the liquid level of the well. This height difference is used to measure the pressure of a liquid.

An enlarged leg manometer comes with an enlarged leg. The float is usually placed inside the engaged leg, and the two legs can be changed for different measurement spans.

The Inclined tube manometer has a measuring leg fixed at a ten-degree angle. This improves the instrument’s sensitivity and can measure even the smallest pressure difference accurately.

For example, take a U-tube manometer and put liquid in the tube. If the liquid level is the same on both sides of the U-tube, the pressure is determined.

Here is the formula, P= rgh

r= the density of the fluid

g= acceleration due to gravity

Where Are Manometers Used?

Manometers are used to measure the pressure of any gaseous or liquid matter with the help of ambient pressure.

Comparison Table between Barometers and Manometers

Differences between Barometers and Manometers

Some manometers also come with pre-filled high-pressure gas. This gas puts pressure on one side, while the atmospheric pressure does the same for the other tube. The difference in liquid levels on both sides is used to determine the pressure of the liquid.

Close-ended barometers may be well shaped or u-shaped. As the altitude rises, the mercury inside the tube dips. On the other hand, the water level inside the sprout changes according to high or low atmospheric pressure for water barometers.

On the other hand, if the manometer is closed on one end and attached to a high-pressure gas on the other end, the pressure of the gas is evident with the closed arm.

A manometer is used to measure the pressure of gas four or liquid matters.

While a barometer is used to give a weather forecast by measuring the atmospheric pressure, the manometer measures the pressure of a particular gaseous or liquid matter. These two machines are different, and you cannot use one in place of another.

So, it is better to use them as per their recommended usage and follow all the necessary steps to get an error-free result.