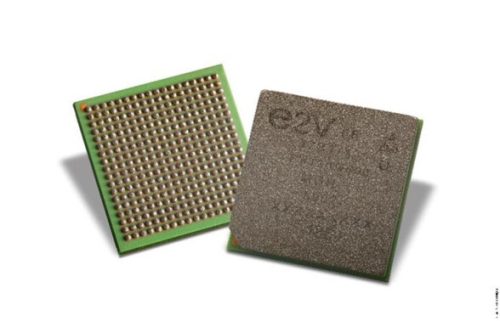 QML Y certification was defined by a NASA led working group and it was officially published in the latest revision of DLA MIL-PRF-38535. The traditional QML V certification was only compatible with legacy hermetic assembly processes and new generation assembly techniques (such as flip-chip on ceramic) and subsequent manufacturing, screening and qualification flows were not taken into account. Reliability is paramount for products entering space and the QML Y allows space systems manufacturers to benefit from these latest technologies whilst still ensuring that each device produced is carefully verified. Teledyne e2v has actively participated in the QML Y working group.

EV12AQ600 is a QML-Y High Speed Analog to Digital Converter. It supports a sampling rate up to 6.4GSPS – among the highest in the world for space applications. It has a 7GHz analog bandwidth and many nice features like the Cross Point Switch, which transforms the ADC from a 1 to 4 channels, the Sampling Delay Adjust, and an easy multi-chip synchronization feature. It has successfully passed radiation testing up to 150kRad and is already Space-proven.

Nicolas Chantier, Marketing Director says “Because of the functionalities embedded in the EV12AQ600 ADC, space systems manufacturers will be able to simplify their design, reduce the number of components on their boards and benefit from the flexibility of a unique quad input switch. Coming with trusted radiation performance, this will have a significant impact by reducing the size, weight and power (SWaP) and increasing the reconfigurability of next generation space systems.”

Teledyne e2v now accepts orders for engineering and qualification models and flight models of EV12AQ600, including full qualification according to MIL-PRF-38535 class Y.