Scarifier Vs Dethatcher – Which Tool is Best For You


There are not many homeowners who can take pride in their long lawn. On top of that, having a clean and well-maintained lawn adds more pounds to your pride. But maintaining a lawn is not easy unless you have the right tools.

You will need a tool to remove debris and clippings regularly and that is when you will come across Scarifier and Dethatcher. Both the tools are designed to clean your lawn but which one you should purchase. In this article, we will compare both the tools and let you decide which one is best for you.

What Is A Scarifier? 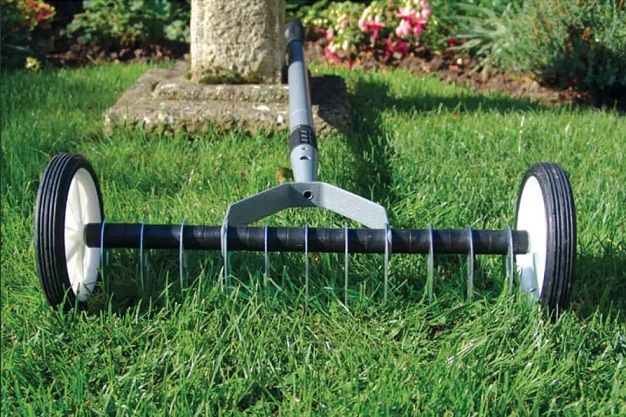 A scarifier is a gardening tool that can slice through the roots and soil for the penetration of water food and pesticides. It has sharp metal blades that can cut the turf for removing organic matter. How a scarifier works is that it leaves holes that make fertilizers, water, and air go deep into the grass. It is similar to raking a lawn and helps to free grass clippings, moss, and other debris.

A lawn scarifier slices the blade vertically and takes out the material upwards. In doing so, it helps in easy removal. Some units also feature a collection bin for catching thatch. This helps to prevent raking. The rotating cylinder digs down for pulling up stubborn thatch. There are even the ones that come with adjustable blades.

What Is A Dethatcher?

The sole purpose of using a dethatcher is to remove the thatch barrier. Just like a scarifier, it also comes with metal blades that can comb the grass. It also helps to pull the thatch on the surface. There are different types of dethatchers like motorized units, dethatching rake types, and tow-behind models. Each of these models is according to the size of the lawn. Sometimes there will also be a dethatcher attachment kit.

On many occasions, people may find it confusing as both dethatching and scarifying is about dethatching. However, dethatching is gentle and shallow compared to scarifying which is more aggressive. In doing so, it does not dig down into the soil. Dethatching can be great for temperature control and it comes in the form of a special hand rake.

What is the Difference Between a Scarifier and a Dethatcher?

Both scarifying and dethatching contribute to better water, air, and fertilizer penetration. Even though they both serve the same purpose, a scarifier is similar to vertical mowing. It cuts grooves through the thatch that helps in better water and oxygen movement into the soil. On the contrary, a dethatcher helps to remove lawn debris and works similarly to a lawn raker. It will not get deep that can be perfect for preventing any kind of damage. If you are looking for an invasive thatch removal procedure, you can opt for scarifying.

Things to Know Mind About Scarifying

Scarifying too early may shock the grass. This can lead to damage when the heating season begins. It is important to mow the lawn before scarifying. In doing so, it will reduce the grass length so that it will not get through the thatch. You should never scarify if you have re-seeded in the past year. This will allow the roots of the grass to go strong and deep.

When Should You Use Scarifier For Your Lawn?

Scarifying can be best during spring as well as in late summer or early fall. You can scarify lightly during the spring season so that it will pull up the material from the last  growing season. It helps to create a perfect base for the upcoming growing season. You can go for scarifying from mid-April until mid-May.

Lawn scarifying also has to be done in late September or early October. It helps to remove the thatch which is made during the year. This also allows the grass to recover prior to the frost starts. During this time, you will have to scarify aggressively for removing thatch accumulation with repeated mowing. However, you should know that there are different types of grasses and you will have to scarify according to the grass type.

Things to Know Mind About Dethatching

Dethatching can be done at least once a year. You can go for dethatching when the thatch is over 0.5-inch. Similar to scarifying, you should mow the lawn before dethatching. This will enable you to perform the task effectively and provide better access. For a spongy lawn, it is advisable to go for a scarifier. Also, never dethatch the lawn if it is in a dormant state. You must allow it to recover quickly and then go for dethatching.

When Should You Use Dethatcher For Your Lawn?

Scarifier vs Dethatcher: Which Tool should you Purchase?

Whether it is scarifying or dethatching, you must make sure that your lawn will look great. Before you decide to go on either process, you will have to consider the type of grass. As both scarifying and dethatching are for better lawn maintenance, you will have to perform either according to the grass. Many people opt for a dethatcher during spring and go for a scarifier in late summer.